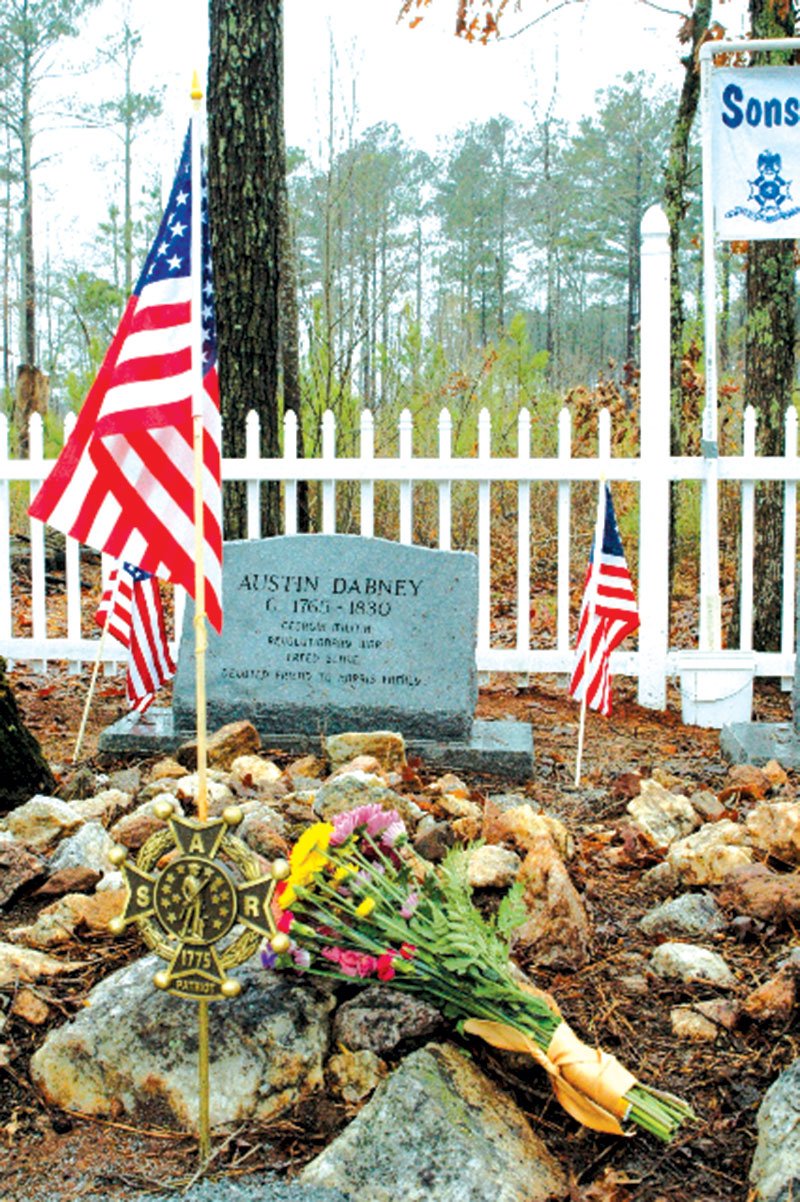 [Photo by Brenda Fayard] Flowers were placed on the grave of Austin Dabney, the only black Revolutionary Soldier to earn his freedom from slavery, land in Georgia and a pension for his service to the nation.

Pike County has been blessed with black leaders and citizens of the highest quality and nearly 200 years ago Austin Dabney – the only black Revolutionary soldier to receive his freedom from slavery, land in Georgia and a federal pension – was a well-known member of the Zebulon community. In 2010, hundreds of people from near and far gathered in Zebulon on a cold, wet Jan. 30 day to celebrate Austin Dabney Day and recognize the freed slave and American Revolutionary patriot and his best friend and Pike County pioneer William Harris.

“This is history being made in Pike County and in the state of Georgia. Austin Dabney and William Harris were best friends who lived here together, trained horses together and today I consider them still together,” said the late chairman of Pike County commission Doug Mangham as he gestured toward the only two graves in the Harris-Dabney cemetery.

At the special ceremony, the names of descendants of the Harris family were called out and one by one they stood in the misting rain to demonstrate the number of lives Dabney touched even though he never married or had children of his own. He was a smart businessman who used his property and pension wisely to increase his wealth, later leaving it all to the Harris family.

Below is an excerpt from the Feb. 18, 1890 edition of the Pike County Journal detailing the incredible life of Austin Dabney.

“In the beginning of the Revolutionary conflict, a man by the name of Aycock removed to Wilkes county, having in his possession a mulatto boy who passed for and was treated as his slave. Aycock was not the bravest of men, and when called upon to do malicious service manifested such uneasiness and did his duty so badly that his captain consented to exchange him for his mulatto boy, then 18 years of age, a stout, hardy youth – upon Aycock acknowledging that he was the son of a white woman and consequently free. The boy had been called Austin, to which the captain added Dabney.

Dabney proved himself a good soldier. In many a skirmish with the British and the Tories, he acted a conspicuous part. He was with Col. Elijah Clark in the battle of Kettle Creek and was severely wounded by a rifle ball passing through his thigh, by which he was made a cripple for life. He was unable to do further military duty and without means to procure due attention to his wound which threatened his life. In this suffering condition he was taken into the house of Giles Harris, where he was kindly cared for until he recovered. His gratitude to the good people by whose attention he was restored to health was never forgotten. He labored for Harris and his family more effectively than a slave could have been made to do until his debt of gratitude was fully paid, then continuing to make it his home.

After the close of the war when prosperous times came Austin Dabney acquired property. He became noted for his fondness for horses and the turf, and was seldom without a fine racer. He attended all the races in the neighboring counties and betted to the extent of his monetary means. His courteous behavior and good temper always secured him gentleman backers. His means were aided by a pension which he received from the United States on account of [a] broken thigh.

In the distribution of the public lands by lottery among the people of Georgia the legislature gave to Dabney a lot of land in the county of Newton. The Hon. Mr. Upson, then representative from Oglethorpe, was the member who moved the passage of the bill.

William Harris, the eldest son of his benefactor, Austin sent to Franklin College, and afterwards help support while he studied law with Mr. Upson, in Lexington. When Mr. Harris was undergoing his examination Austin was standing outside of the bar, exhibiting great anxiety on his countenance, and when Harris was sworn in he burst into a flood of tears. He understood his situation very well and was never guilty of impertinence. He was one of the best chroniclers of the war in Georgia. Judge Dooley thought much of him, for in the war of the revolution he served under his father, Col. Dooley.

He drew his pension in Savannah, where he went once a year for this purpose. On one occasion he went to Savannah in company with his neighbor, Col. Wiley Pope. They traveled together on the most familiar terms until they arrived in the street of the town. Then, the Colonel observed to Austin that he was a man of sense and knew that it was not suitable for him to be seen riding the streets side by side with a colored man, to which Austin replied that he understood the matter very well. Accordingly, when they advanced along the principal Street, Austin checked his horse and fell behind. He had not gone very far before Col. Pope passed by Gen. James Jackson’s house, who was then governor of the state. Upon looking back he saw the governor run out of the house sees Austin’s hand, and shake it is if he had been his long-absent brother, draw him off his horse and carry him into his house where he stayed whilst in town and was treated with marked kindness. Col. Pope used to tell this anecdote with much glee, adding that he felt chagrin when he is certain that whilst he passed his time at a public house, unknown and uncared for, Austin was the honored guest of the governor.

Austin’s affections were entirely centered in his protege, William Harris, coming with him to Pike county in 1826. The old man was a frequent visitor to Zebulon where he was respected by everyone. He was quite a favorite with the ladies and children of the place, going to their homes in seating himself on a stool for some low place, would talk to them of the Revolution, rarely ever leaving without receiving some token of kindness.

He lived to a good old age, willing all his property to Mr. Harris, who followed him not many years afterward. Their graves are near together on Robert Mitchell farm.”

Not only did Dabney help put William Harris through school at Franklin College (now UGA), but the land he left to the Harris family has remained in the family as timberland and when needed has been cut to finance the schooling of other Harris family descendants.