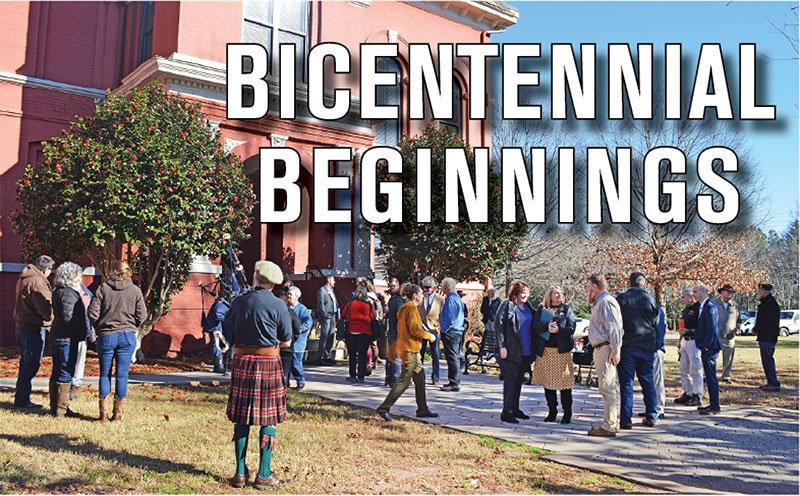 A large crowd of citizens gathered on a cold Jan. 12 morning on the courthouse square for the official Bicentennial Kickoff to recognize 2022 as the 200th birthday of Pike County and hear of plans for celebrations.

“This is an historic day for Pike County, a time to look ahead to the celebration to come this year and even further to the bright future in store,” said special projects and economic development director Stephen Brentlinger. “I was born and raised in Pike County. When my wife and I married, we knew we wanted to move back here. The people here make Pike special. Pike County is warm, it is strong, and it is home.”

During the event, longtime Pike resident Walker Chandler played the bagpipes and the Bicentennial Logo was ceremonially unveiled.

“The Bicentennial Logo depicts our historic courthouse and the words ‘Making history for 200 years.’ Now it’s time to go out and make history for 200 more,” said Brentlinger. “Bicentennial events will be held throughout the year in each of our great communities. Local municipalities and organizations will combine to make everything memorable.”

The history of Pike will be shared at many local events throughout the year with a special Country Fair Around the Square planned for Aug. 20 in downtown Zebulon to highlight the county’s history. Other tentative plans to celebrate Pike’s 200th birthday will take place throughout the year, including at the Optimist Club Cornhole Tournament at Zebulon City Park on March 19, at the Williamson Wisteria Festival April 1-2, at the Juneteenth Celebration hosted by NAACP on June 19, at the American Legion Post 197 5K/10K event in April, at the SlowExposures Exhibit Sept. 17-18, at the Meansville Music Festival in September, at the Concord Country Jubilee Oct. 15-16, at the Post 197 Veterans Day event Nov. 11 and at the Pike County Christmas Festival and Parade in downtown Zebulon on Dec. 17.

“The year-long Bicentennial Celebration is intended to engage the citizens across the county in recognizing and celebrating Pike County’s past, present and future,” said Johnson as he read the proclamation aloud in front of the courthouse stairs.

Zebulon Montgomery Pike was born on Jan. 5, 1779 during the Revolutionary War. His father was a career officer in the U.S. Army, serving as a captain in the Revolutionary War and a brevet lieutenant colonel in the army after the war. Zebulon followed in his father’s footsteps and was appointed as an ensign in his father’s 2nd Infantry Regiment in March 1799 and was quickly promoted to Second Lieutenant and two years later to First Lieutenant and transferred to the 1st Infantry Regiment. After America’s purchase of the Louisiana Territory from the French, Lieutenant Pike was appointed to conduct an expedition to trace the Mississippi River to its source. In 1805 he and 20 soldiers departed for St. Louis, Missouri and although they incorrectly claimed Lake Leech as the origin of the Mississippi River, he was promoted to Captain after the excursion.

Captain Pike was again tasked to conduct a geographical exploration in the Louisiana Territory and his party of 24 departed St Louis, Missouri on July 15, 1806. On Nov. 26, he unsuccessfully attempted to reach the summit of the mountain in Colorado that bears his name, Pike’s Peak. His expedition team then moved south reaching the Rio Grande. Having been found on Spanish territory, he and his party were taken to Santa Fe; however, after a lengthy examination and seizure of his papers, the Spanish released them. He arrived at Natchitoches, Louisiana on July 1, 1807, concluding his expedition. In 1810, he published a narrative of his two expeditions. After his second exploration, he was promoted to Major, to Lieutenant Colonel and then assigned as the Army’s Deputy Quartermaster-General. On June 18, 1812, the United States declared war against Great Britain, known as the War of 1812.

“This was perhaps the most critical defense of our newly formed United States of America and our democratic form of government,” said Richardson.

On July 6, 1812, Lieutenant Colonel Pike was appointed the 15th Infantry Regiment’s Colonel and commander. The Regiment participated in the fall campaign in northern New York in 1812. On March 12, 1813, at the age of 34, he was appointed Brigadier General to lead the US Army’s expeditionary forces in Canada. The expeditionary force conducted a 180-mile march over land from Plattsburgh at Lake Champlain to Sackets Harbor, New York on Lake Ontario arriving on March 27.  After preparations for the invasion of Canada, on April 23, General Pike’s 1,750-man ground invasion force departed from Sackets Harbor on 14 vessels including the USS Madison, the flag ship of the expedition. At 8 a.m. on April 27, 1813, the expeditionary force landed three miles west of York and assaulted the British forces defending York. As noon approached, Pike’s column reached an unarmed redoubt known as the Half-Moon Battery. The British guns by the governor’s residence opened fire on the Americans. The American field cannons from the artillery and the schooners guns responded to the garrison guns. Seeing the damage that had been inflicted, the British abandoned the garrison position. As the British departed, a fuse was laid to the grand magazine that was located near the governor’s residence and contained 200 barrels of powder and prepared ammunition.

“General Pike, at the head of his line, watched the British cannons fall quiet. There was no clear indication that the British had given up the fight. General Pike moved and held his force in position about 400 yards from the garrison, expecting an attack. Accompanied by his aides, he assisted with the removal of a wounded infantryman and then turned to interrogate a captured British sergeant. The general sat down on a tree stump, and at that instant the magazine exploded. A deadly rain of debris fell on the American line, killing and wounding scores of men, among them General Pike. The fallen general suffered from either head or back injuries that proved fatal. He was transported to one of the schooners and then to the USS Madison. Within minutes after the explosion, discipline had returned and the ranks had been restored. No British counterattack occurred. The royal standard, which had miraculously survived the explosion, was hauled down and replaced with the Stars and Stripes.”

The British flag was sent to the USS Madison, where a corner of it was laid beneath the head of General Pike just before he died. General Pike was buried at the Sackets Harbor Military Cemetery and he died a national hero.

“There are numerous counties throughout the country named after Pike as well as a mountain peak. Nine years after his death, Pike County, named in honor of Zebulon Pike, Georgia’s 57th county, was established on Dec. 9, 1822. There is an initiative to honor General Zebulon Pike with a shadow box consisting of his photo, a more detailed biography, and supporting maps which will be mounted in the Pike County Courthouse as part of the county’s bicentennial activities.”

The Bicentennial Committee consists of chairman Brentlinger, vice chair Meredith Maddox, secretary Karen Brentlinger and treasurer Bryan Richardson as well as others who are contributing to the ongoing celebration.