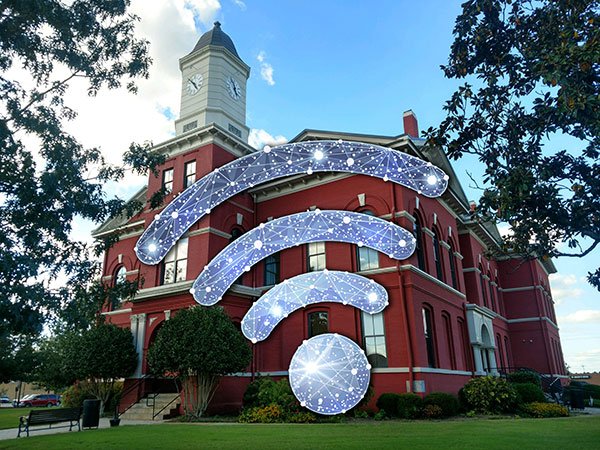 High speed ahead: Look back at 2021’s top stories

The year 2021 brought good news for local internet access as it was announced that Pike was among 18 middle Georgia counties to be provided high-speed internet through a partnership between Southern Rivers Energy and Conexon. SRE’s current infrastructure will be used to run fiber internet to the more than 3,000 accounts in Pike. According to recent updates, Conexon has trial customers who are giving feedback on service and the service will offer several packages with download speeds of 2000 Mbps and uploads between 1,000 and 2,000 Mpbs. To find out more, go to Connect Powered by SRE at conexon
connect.com/southern
riversenergy.

Pike County weathered the rises and falls of COVID cases in 2021 as most annual events were held again including the Concord Country Jubilee. Cases surged in late August and early September, forcing the closure of local schools but the numbers quickly dropped and students returned to class after a week of working from home. There were 38 Pike citizens who lost their lives to COVID in 2021.

Community members also mourned the loss of two local teenagers, Jamori Williams and Riley Nuce, who were both students at Pike County High School. The community showed their support for the family by wearing Jamori’s favorite basketball team’s colors and dressing in camo for Riley. Students expressed their love for the students in various ways, including posters with memories of them and a scholarship fund.

Several heroic citizens saved the day in the past year, including George Smith and Ronald Boes who stopped at an early morning car accident and rescued a young driver who was trapped in a car as it caught fire. Shelby Hatchett was the driver and she swerved to miss a deer and her vehicle struck a brick sign. A woman was rescued from an abusive situation after a local citizens called the sheriff’s office to notify them that someone was seen on a surveillance system at a house under construction on Tanyard Road. The female was located in the attic with stab wounds and she was air lifted to America Medical Center. Lydell Holmes lit a blanket on fire in the structure and faced multiple charges, including aggravated assault, burglary, possession of a knife during commission of a crime and arson.

The Pirates football team looked to the past as they celebrated the start of the team 50 years prior. Team members from the 1971 and 1972 teams were honored at home games as they served as team captains and were recognized by the team and fans.

Pike’s past was celebrated by local artist Keith Edmondson as he painted many historic scenes of popular places and pastimes in the county. He hopes to keep the history of the county alive through his beautiful paintings and pass down a passion for history to future generations.

Big foot stories returned to Pike County as a sign was posted that said, ‘Big Foot Nest’ with an arrow pointing into the woods off Highway 18 in rural Molena. The sign stirred up memories of a previous Big Foot incident in Pike in which a casting was taken of a foot with dermal ridges that was 17.5 inches long and 8.5 inches wide.

Throughout the school year, several Pike County High School teams had outstanding seasons, including the baseball and softball teams, both the boys and girls soccer teams and the track team which had two state champions – Tayla Moreland in long jump and Zy Thompson in high jump. Gymnast Madelynn Crow made history for the school as she became the first gymnastics team member to earn three state championship titles – and a perfect 10.0 for her floor routine.

As usual, Pike citizens worked together to better the community as Pick Up Pike mobilized to clean up roads and encourage everyone not to litter. They hosted several events to clean up heavily-littered areas and asked property owners to clean along the roads near their property regularly – and especially before spring when trash is often chopped up with the fast-growing grass. One local family had fun helping the community as Rick Rickerson and his son and grandson built two cars for a demolition derby – promising to donate the entire $1,000 in winnings to the Pike County Animal Shelter if they won. Josh Rickerson won second place but no cash prize so members of the community worked together to raise the $1,000 donation for the animal shelter anyway.