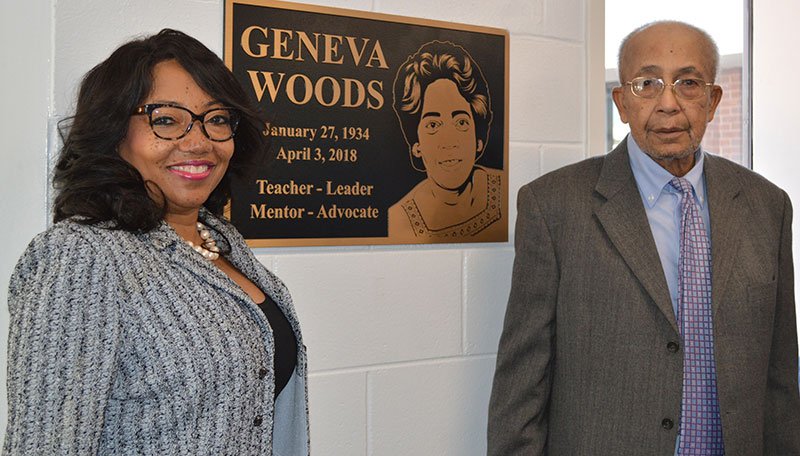 The life and legacy of longtime local teacher Geneva Woods was honored during a dedication ceremony at Pike County High School on what would have been her birthday, Jan. 27. Above, her daughter Stacey Mangham (left) and her husband David Woods (right) stand by the plaque which features her likeness. Stacey Mangham speaks about her mother. Stacey Mangham is a graduate of the PCHS Class of 1982 and is now Principal Systems Engineer and Group Leader at The MITRE Corporation in McLean, VA.

Geneva Woods, a longtime local teacher, leader, mentor and advocate was honored at Pike County High School on what would have been her birthday, Jan. 27. In addition to teaching many generations of students, she worked to make sure students who should have graduated with the Class of 1969 – but were not allowed to because of peaceful protesting of civil rights issues – earned their diplomas and had an historic graduation ceremony on March 3, 2018, nearly 50 years later.

“This dedication is long overdue for the impact she had on all of us, this community and the school district. After this, several folks will be interviewed about her impact and a video will be placed on the school’s YouTube channel. Then a QR code to that video will be posted below the plaque so students from now on and forever can hear a video of Geneva Woods and what she’s done for the community. We want to make sure our young people know the story of Geneva Woods from the mouths of those who she impacted the most.”

The invocation for the special dedication ceremony was given by Rev. Fred Blackmon and several speakers shared their memories of Mrs. Woods’ impact. Harvey Booker was the first to speak.

“Mrs. Woods was a great inspiration to us all,” he said to applause from all present. “One of her favorite sayings was, ‘If you know that you know, you need not be afraid.’ She taught us to be prepared and I take that with me to this day.”

Brian Hubbard who was a 1993 graduate of Pike County High School said he met ‘Mama Woods’ as he and others called her in tenth grade biology.

“I was just cruising by in school,” he recalled. “Every time we had a test, she would give me my test back and say, ‘You can do better than that’ and I began to realize that she was asking me to live up to my potential and she saw potential in me that not very many people saw.”

He said in college he was inspired to send a letter to a former teacher by a professor and Woods wrote him back – not just once – but many times, each time including $5.

“The Bible talks about sowing seed and reaping harvest and that’s what teachers do. I’m proud to be part of her harvest and fruit from her tree,” said Hubbard.

Rufus Clemmons noted that he grew up with Mrs. Woods in church and the community.

“She always did what she thought God wanted her to do and whatever she did, she did it right and all that she did was not done in vain,” said Clemmons. “After 35 years of teaching when asked her advice to students, this is what she said, ‘Do what you are supposed to do at the time you are supposed to do it and you will go farther, faster.’”

Charles Davis, a graduate of the Class of 1969 said he was proud to celebrate a lady who was an icon in the community.

“We celebrate people we haven’t ever met and find reasons not to celebrate people who have impacted us in real life,” he said. “When she was able to start working to help us get our diplomas, we were beat down to a point where we were defeated. She said, ‘Sometimes when you are wounded, you’ve still got to fight.’ The Bible says in Jeremiah 3:15, ‘He gave some as apostles and some as prophets and some as evangelists and some as pastors and teacher.’ She may have gotten her worldly pay from the county but on the spiritual side, she was paid by God Almighty.”

Eve Booker said Woods was a teacher and mentor who inspired her to pursue higher education and actually took her sister Happy to her first college visitation at Tuskegee University.

“She built relationships with every student in her class. She loved basketball and she would go on the road with us and she was kind of like our coach on the side,” said Booker. “She really inspired me to go to college. Not that I would but everybody knew you could not cheat her class. She had eyes in the back of her head and she’d always say, ‘If I don’t get you in the wash, I’ll get you in the rinse.’ I became a teacher and taught for 20 years and my teaching style was like hers, fair to all students. She was like my mom away from home. I loved Mrs. Woods and I know she loved me.”

The last speakers were her daughter Stacey and her husband David Woods.

“We want to thank the board of education and the NAACP and I know that my mom would be very proud,” said Stacey. “My mother was a lover of people, a lover of learning and education and a lover of justice. She wasn’t going to sleep until the students from the Class of 1969 got their diplomas. That was her life goal. She was also a lover of family, a lover of God and I’m so thankful to be able to count her as my mother.”

David Woods was a longtime Zebulon council member and instrumental in the success of the Zebulon City Park. He and Geneva have four daughters – Stacey, Lavatia, Latita and Yolanda, five grandkids and three great-grandchildren. He was visibly moved by the ceremony and the unveiling of the plaque with Geneva’s likeness and he thanked the board of education and everyone involved in the special ceremony.

The memory of Geneva Woods was honored by the Zebulon City Council in April, 2018 as she was recognized as the second Zebulon Citizen of the Year and her family was presented with a key to the city at her funeral.

During the special graduation ceremony for members of the Pike County Consolidated High School Class of 1969, she was presented with the school’s Coin of Distinction by the superintendent for her efforts to ensure that all students from the Class of 1969 who earned the necessary credits would finally receive their diplomas. There were 43 students who received diplomas but sadly, 13 students had passed away.

“I would be remiss for not taking a moment to thank Mrs. Geneva Woods who is a living example that the best teachers never stop caring about their students,” said superintendent Dr. Duncan at the historic graduation ceremony. “When someone mentions a Civil Rights leader, most think of Dr. Martin Luther King Jr., but I’m privileged to be in a room full of Civil Rights leaders. While there is still work to be done, it’s difficult for me to remember the world in which you lived in 1969. Usually commencement speakers share inspiring messages with graduates, but today, you are our inspiration.”

Woods was celebrated throughout the ceremony for her bravery as a teacher and the impact she had on her students and the community. It was also noted that in order to meet integration requirements while keeping most black students at PCCHS, Geneva Woods was the first black teacher in 1969 at Pike County High School and 15 black students were also moved to PCHS that year

“I call everybody I teach my baby and these are my babies. I think there may be some of my babies in the audience too,” said Woods as hands raised all across the audience. “I love you all and I am proud of you for becoming productive citizens even without your high school diploma. I’m proud of you for doing what you thought you were supposed to do.”