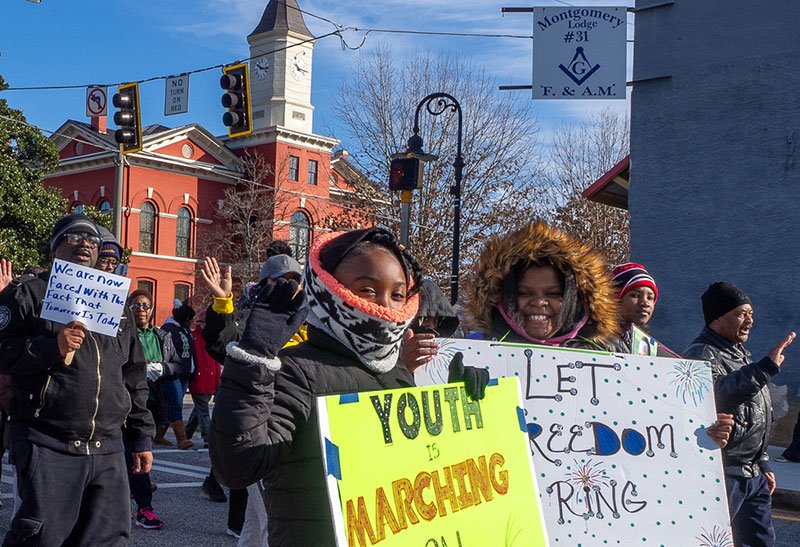 [Photo by Chad Moore / Moore Photography] Citizens participate in a previous Martin Luther King Jr. Day parade around the courthouse square. This year’s parade will be held at 10 a.m. Monday, Jan. 17 with line up by 9:45 a.m.

The parade planned for Monday, Jan 17 to honor Dr. Martin Luther King Jr. has been canceled due to weather conditions.

The theme for the 2022 parade would have been “Let us pray together that we stay together: A Return to Our Spiritual Roots” and the grand marshal would have been Marvin Hollis. Due to the pandemic, no program will be held following the parade.

The MLK Celebration grand marshal this year is Marvin J. Hollis who is the youngest child of the late James R. Hollis and Elizabeth T. Hollis. He is a native of Pike County where he still resides. He graduated from Pike County High School in 1981, from Middle Georgia College in Cochran, GA with an Associate in Fine Arts in 1983 and continued his education at the Art Institute of Atlanta and Art Institute of Chicago schools of Design where he earned his Bachelor of Arts in 1985. He is a member of Kappa Alpha Psi Fraternity, Inc.,

He is a member of the Mt. Hope Baptist Church where he has worshiped for more than 50 years. He is currently the President of the Usher Ministry, Program Committee and church events coordinator and designer. He is a former member and founder of the R.L. Hodo Gospel Ensemble and is co-founder of Youth-In-Action.

He is part of United Men of Pike for Progress where he served as secretary for many years and spearheaded the annual coat drive and back to school supplies drive. He is also director of the Pike County Community Male Choir and was a founding member. In 2005, he was presented with the Golden Link Award by The Atlanta Journal-Constitution for community outreach and service. He earned the Community Service Award in 2017 from the Negro Business and Professional Women Club. He received the Advocate Against Domestic Abuse Service Award in Spalding County as well as many other recognitions and honors.