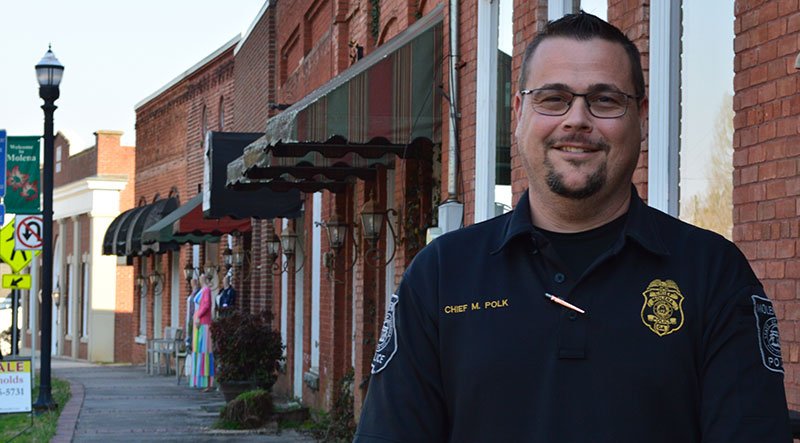 During the monthly status report of the Molena Police Department at the Feb. 14 council meeting, one topic led to others resulting in unanimous approval of items which will strengthen public safety allowing the modest agency to vie with other larger departments in west Georgia for diversity and efficiency. All of this is taking place under the leadership of chief Matt Polk with his six months of tenure.

“We received 214 calls for service in January. Forty three citations were issued, 111 traffic stops were made and several misdemeanor marijuana cases were processed,” said Polk.

“The free Crown Victoria car we received in December is ready to go with 142,000 miles on the odometer. With the car comes the offer of another free Crown Vic outfitted as a K-9 vehicle,” he said.

Polk suggested since the second car comes at no cost, the city could receive it as a source for spare parts or as a decoy K-9 staff. Discussion led to loftier aspirations.

“I had a K-9 with the Zebulon Police Department and provided housing for the dog,” said Polk. “Food for the dog was donated by a local resident. The benefit of a K-9 is like having another officer.”

Having piqued the interest of council, Polk offered his service to house a dog for Molena. Further interest was generated after Polk shared a past incident in which a vehicle was stopped. A K-9 confirmed the suspicion of drugs and after seizure and conviction the department received $16,000 from the bust.

The Molena Police Department will soon have a K-9 unit, the use of five Bodycams and access to JusticeOne online service.

• Heard the city will sign a garbage service contract with Express Sanitation perhaps as soon as March 1.

• Learned the city did not qualify for the internet grant because it was located in an area serviced by AT&T. Work continues to expand the current wireless project as residents beg for access. New pops will be installed soon.

• Tabled a quote for $25,000 to solve ongoing problems with buzzards roosting on the water tank.

• Heard the new budget had accommodated the request for salary increases but the amount was not disclosed.