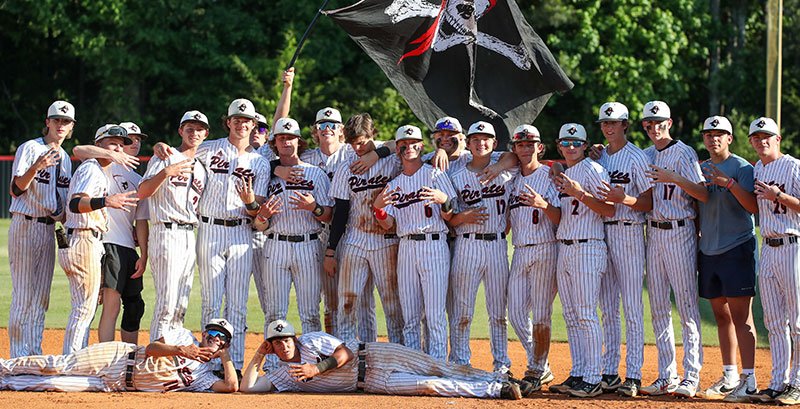 The Pirates fought back from a loss in their first game of the Elite 8 playoffs series against the Greater Atlanta Christian School Spartans to earn a spot in the Final Four as they dominated with an 8-1 win on Wednesday, May 11. They hosted the Final Four series against the defending state champions from North Hall with a double header Monday, May 16 at “The Jack” after the Pike County Journal Reporter’s press deadline.

“The playoffs give players an opportunity to prove themselves in many ways. Some players show the ability to rise above the pressure, some players show toughness and others show unbelievable heart. The great thing for a coach is when your entire team shows these traits and characteristics. It’s a great thing for a baseball series when both teams show these traits. This is what the fans that packed “The Jack” got from the Pike County Pirates and the Greater Atlanta Christian School Spartans for three outstanding GHSA Elite 8 playoff games,” said coach Craig Chatman.

The first game of last Tuesday’s double-header seemed like dejavu from the week before for starting pitcher Mason Trucks. Trucks was opposed by the Spartans top starting pitcher, Rhett Wells. Trucks was great on the mound. He gave up two runs, one earned and struck out eight in the seven-inning performance. However, the Pirates were held scoreless through six innings by a combination of Wells and fellow left hander Sawyer Crum. In the top of the seventh inning, the Spartans used two singles to begin a rally that led to two runs and a 2-0 lead. Braden Osbolt’s two-out, two strike, two run double tied the game at two in the bottom of the seventh. The Spartans then struck for three runs in the top of the eighth inning on a solo home run by Graham Stogner and a two-run shot by Conrad Cason. The Pirates tried to rally in the bottom of the eighth inning but could not push across the tying runs. Sawyer Crum ended up being the game one winner, and Cason came on in the bottom of the eighth to preserve the 5-2 lead for GAC. The Spartans victory pushed their record to 28-6, and a 1-0 series lead.

In game two, the Pirates once again turned to Braden Osbolt with the season on the line, and Osbolt once again answered the call. Osbolt was outstanding on the mound, tossing a complete game while striking out 11 batters. Ian Davis singled off of Stogner in the first to score Kole Hammond and Osbolt. The defense was stellar again in game two and Osbolt made the three first inning runs hold up as the Pirates were able to even the series at one game each with the 3-2 victory. The win gave Pike County a record of 31-5  heading in to Wednesday afternoon.

After two batters in the deciding game three, Trevor Bagwell was in trouble as he faced a first and third no out situation with the middle of the Spartans line-up coming to the plate. Bagwell struck out the next two hitters before falling behind Spartan DH Noah Deas which forced an intentional walk. Tyler Halsworth hit a two-out RBI single that put the Spartans on the board 1-0. Bagwell was able to wiggle out of the trouble, allowing only one run and that was it for Spartans scoring on the day. Coleman Johnson singled, Kole Hammond reached on an error and Kaleb Hammond was hit by a pitch to load the bases with two outs in the first. Caden Swift was able to reach on an infield single that produced two runs and started the four-run first inning rally. Caleb Hammond scored on Swift’s double in the third and Ridge Smith scored on Zane Axelbergs’ single to push the Pirates lead to 6-1. Kaleb Hammond added a two-RBI double in the fourth for an 8-1 lead and the margin of victory. Bagwell was outstanding on the mound, allowing three hits over six innings while striking out 10 Spartans. Kole Hammond came on to throw a scoreless seventh inning and push the Pirates into the GHSA AAA Final Four!