The Pike County Pirates football program was riding high with a two-game winning streak heading into their non-region match-up against undefeated Howard on Friday night in Macon. The Pirates were looking for a three-game winning streak heading into their last non-region game of the 2022 season. Pike County may not have come out victorious on the score board Friday night in Macon, but there is a growing feeling that the Pirates football team in starting to come together. The Howard Huskies defeated the Pike County Pirates 14-3 Friday night, and here is how it all played out.

The Pirates received the opening kick-off of the game and went three and out, gaining six yards. Gage Lee’s 49-yard punt pinned the Howard Huskies offense inside its own 10-yard line. It did not seem to phase the Huskies one bit. They went 93 yards in nine plays to score the game’s opening TD on a 4-yard run. The Huskies led 7-0 with 6:00 minutes left in the first quarter. After the kick-off went out of bounds, the Pirates offense took over on its own 35-yard line. The Pirates used 14 plays, and covered 47 yards to get to Gonzalo Traschler’s 40-yard field goal. The score was 7-3 with just under 9 minutes left to go in the second quarter. That was pretty much it for the Pirates’ offensive the game. The defensive play for both sides was stellar.

Howard’s defense held the Pirates rushing attack to just 59 yards on 33 carries. Gage Lee was able to have his best passing night of the year, completing 13 passes in 22 attempts for 141 yards. The longest play for the Pirates offense was 35 yards, and the longest run of the game was just 10 yards. The Pirate defense was just as good holding the high-powered Husky offense to 261 yards on the night and just 14 points. That is 22 points below the season average for the Howard offense. A big reason for that was the play on the defensive front by Carter Steele. Steele had seven tackles and a sack for the Pirates defense and was dominant from the second quarter on.

The Pirates gained 200 yards of offense on the night, and were kept out of the end zone for the first time all year. Jakilen King led the Pirates in receiving yards with 79, while Gage Lee amassed 172 total yards on the evening. The Pirates dropped to 2-3 on the season while Howard remains unbeaten. The Pirates have this week off, and will return to action on Sept. 30 at Lamar County High School. 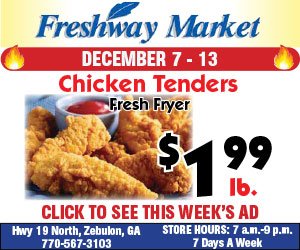