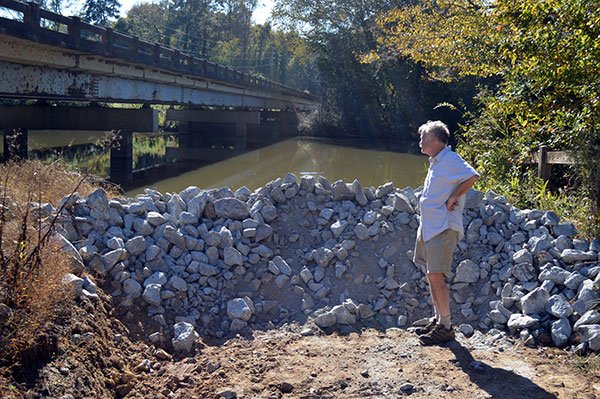 Pike County citizen Walker Chandler looks out over the Flint River at Flat Shoals bridge where a driveway was built across the public access road and a large wall of rocks placed right at the river’s edge.

The access area next to the Flat Shoals Road bridge was blocked off last week as a driveway was built directly across it with a five-foot wall of rocks right at the water’s edge. The area was the only public access to the Flint River in Pike and has been a gathering area for citizens for hundreds of years. In the 1800s, families in the area would travel to Flat Shoals for picnics almost every weekend.

“This is one of my favorite places in the world. The geography of the river is so unique here. It’s rare, it’s special and it’s just beautiful. There’s nothing like the sound of water rushing over the rocks,” said John Hogberg who visits the area often.

According to county manager Brandon Rogers, the county commission did not approve an attempt to block the public access road, however a driveway permit was granted to The Shoals subdivision HOA president Thomas Morgan.

A notice was posted Oct. 29 at the site by Pike County Building and Zoning, ordering work to cease and desist as soon as possible.

County attorney Rob Morton noted this has been an issue many times over the years and the property lines were last identified and title searches done around 2009 when riprap rocks were placed at the water to keep people from getting out beside the bridge.

“I’m not aware of another public access other than that one in the county. All the access to the Flint River in Pike County is on private land,” he said. “This is in the right away and from past experience, the county’s right of way went to the fence line.”

Former commissioner Roosevelt Willis said when he was in office in 2009, he and other commissioners voted not to allow the access to be blocked.

Tom Morgan is an attorney who has lived in The Shoals subdivision for more than 10 years and he owns the property adjacent to the former access road by the Flat Shoals Road bridge. He said the Flint River through Pike is not a navigable river in the legal sense because it does not support freight traffic as the law states.

“I have owned substantial river front property in the past, and am still privileged to own river property today. I was a member of the River Keepers organization in its inception. I fully support kayakers and floating down the river and have done miles of it,” Morgan said.

“But, I am also taxed for my property bedded under the flow of the Flint River – the same as all other adjoining river property owners here. This tax includes my adjoining river property up to the center of the channel of the river. Therefore, I am concerned about the nature of the river and the lunancy of its users claiming the river here to be public use,” he said. “Unlike the complainers, I am invested in the river as a taxpayer and as a regular river user. I understand the complaints but the complainers don’t understand what their complaints are about until they understand the rules and laws about our wonderful Flint River. Furthermore, because the river is certainly not navigable here by law; and, it is also deemed private property by surveyors and by law enforcement officials as also by law. Others as non-river property owners thinking the river is public appear ignorant of the law when complaining about the river here at the bridge being a ‘public river.’ Neither common law nor our Supreme Court ever supported such false narrative and misconception.”

Morgan said the county does not own the right of way as a titled property owner to the access ramp at the bridge. He claims the county only has a servitude or right to control the right of way for purposes of the health, safety and welfare of its citizens.

“Only the temporary stopping on right of ways for the purposes of letting someone off or on the right of way is actually allowed,” he said, adding that the county will never declare the area as a public boat ramp since they would be liable for personal injuries and property damage. “I have to set the record straight for people who think the river is public – it is not. According to state law, the ‘river here is wholly and absolutely private.’ People can get out on the other side of the bridge, it’s a long trek to the river, but it’s there. But the problem is, that’s also private property.”

Morgan said other than ownership issues, members of the public throw trash in the area, damage private property, dig up the area with trucks and ATVs, paint graffiti on the bridge and natural areas and cause erosion of topsoil in the area from use. He said preventing the public from access the river helps ensure the safety of the ecosystem.

“Now, after having identified the problems, all concerned can start a relationship of working together to build a solution for the needs of the legitimate river users with our adjoining property owners, including me,” he said. “I love the river. I hate river abusers. We have problems here so let’s start working together now before it’s too late.”

He noted that the Flat Shoals Bridge is on the state’s DOT project list to be replaced or rebuilt in about two years and the state could build a better, safer access area at that time.

On June 11, 2021, a land easement was filed for the property to which the driveway was constructed. The land easement from Ark Builder Inc., care of Carol Smith, granted Tom Morgan a 50-foot strip of land across the southern boundary of the lot adjacent to the access road. It states that the land involved in the easement shall be restricted from access from within The Shoals entrance driveway, shall only be accessible from the Flat Shoals Road right of way at the grantee’s discretion, shall be available to the grantee for 12 months and shall automatically renew unless terminated by either party, access to the premises shall only be during daylight hours and the “premises shall only be used by grantee or by grantee’s guests with grantee is personally attending with guests for purposes of hiking and fishing and other passive uses but premises shall not be used for commercial or public use.”

Morgan owns a property valued by the Pike County tax assessors at $332,326 at nearly the northern most part of the subdivision and only has claims to the southern border of the subdivision through the land easement granted earlier this year.

“Actually, although it might stop a tank,  its obvious purpose is to stop the general boating public from using the public boat ramp on the Pike County side of Flat Shoals.  It is the only public boat ramp in the county,” said another Pike County attorney Walker Chandler. “The plat of the subdivision clearly shows that it does not own up to the center line of the public road, but only to a line more or less where its fence now runs. Someone also put up steel fence posts and yellow tape on the public right of way. You will notice that the ‘driveway to nowhere’ is dangerously close to the eastern end of  the bridge. We shall find out whether or not the person who issued the permit was wise to what was being planned. or whether he was hoodwinked.”

The Pike County Journal Reporter will provide follow up information on this issue as it becomes available.