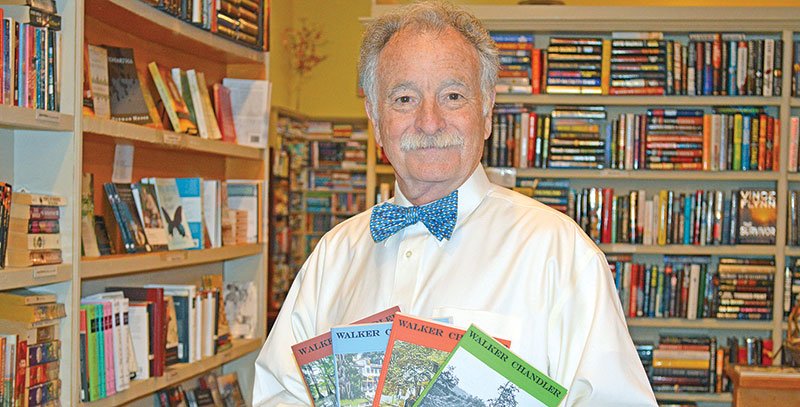 Local attorney and community member Walker Chandler recently released his Radium Springs series and he will host a book signing from 5 to 7 p.m. Saturday, May 14 at A Novel Experience on the courthouse square. Walker worked on the 8-book and four volume series for at least five years, drawing on his knowledge of the nuanced history and culture of southwest Georgia during several different eras of American history.

“This series shows how life really was in Georgia during the various periods recounted – which includes time before the arrival of ‘the English white tribe’ and some of the main characters stand aside from the action and beliefs of the times in which they are living,” said Walker. “I think, too, that the narrators and characters show modern readers how they too were flesh and bone and had true passions and beliefs and fitted themselves into those times and cultures. I would like to inspire more and more thinking about and reading of history and to evoke realistic considerations of human nature and the human experience.”

The four volumes are for sale at A Novel Experience in Zebulon and online at Amazon.com and Barnes&Noble.com.

The eight-book series tells the life and times of Neeves Washington Bryant and in book one, it tells of his youth in southwest Georgia – including a trip to Atlanta to fetch his wounded father from the Civil War fighting in Atlanta in 1864. In the second book, Neeves writes of his harrowing adventures in Utah in 1871-72, including his life among the Ute Indians in the Wasatch mountains. In book three, ‘Wash’ returns to Blue Springs, south of Albany to study ancient and modern medicine. Throughout all of the volumes, Neeves tells of the women he has loved, the morals and practices of the times, of his family and friends and the sometimes-terrible trials and tribulations of the post-War South. He tells of the lynching of his friend’s son and of his role in its terrible aftermath. His books follow themes of revenge, crime, racial tensions and southern culture.

“A lot of people don’t realize how black and whites got along pretty well but there were exceptions that couldn’t just be ignored like the lynching of an innocent man. I’m trying to give an accurate picture of what I think it was like. There are a lot of issues raised that are designed to get readers to think what they would do if they were placed in that position.”

Bill Coleman, a doctor who lives and works in New Orleans, said that Walker’s writing is like “Eudora Welty, Flannery O’Connor, William Faulkner, Robert Penn Warren, and so many other giants of the pantheon of Southern literature.”