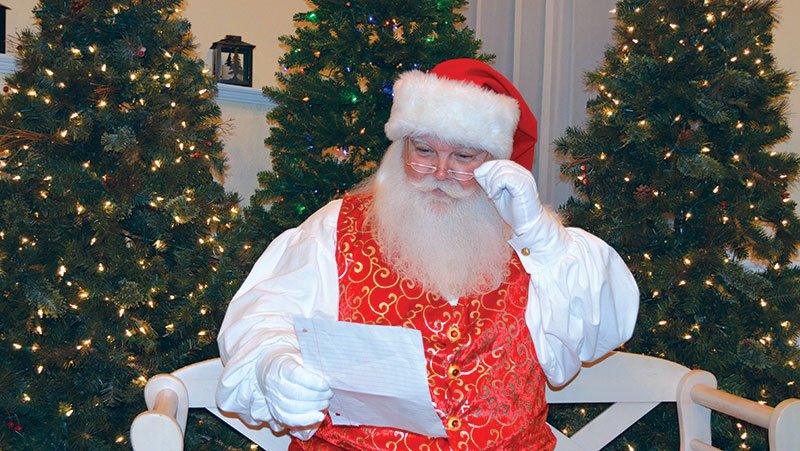 Some children were more concerned with the wishes and wellbeing of others than their own, including Porter Duman who wrote, “This year I want kids with sicknesses to not have sicknesses.” Levi W. wrote that he really wants a new scooter, his mom wants a bracelet and his dad wants a new TV that has internet. Scarlet Sharpe wrote, “This year I want something different. I wish my GG could not have cancer. I know it’s a lot to ask, but please!!!” Clara Shaw Jones said, “I want my Bet and Aunt Morgan to feel better and for my Jojo’s hip to feel better too.” Cooper Johnston asked to spend time with family and McKinley Phillips wrote, “P.S. I would also like happiness for my family.”

Many children were sure to let Santa know about their behavior this year and Riley Campbell was concerned about Santa’s behavior too. She wrote, “Santa, how are you? I have been good this year. I hope you have too” before requesting toys and wishing Santa a good Christmas Eve night. Malcome wasn’t sure what Santa would think of his behavior, writing, “I think I have been a good boy this year but Gigi don’t think so. I do my chores every day.” Malachi Jordan asked if he is on the nice list or the naughty list. Easton promised to be good next year and asked for a TV and video game.

Fisher Williams wrote that he has “been a good boy this year. I’ve been eating eggs that are healthy for me because my mommy wants me to eat them.”

Jaxson Ethridge wrote, “Dear Santa, This is your friend Jaxson. I want Pokemon card and a trex garage and I want a Santa toy that does what I do. I would like a horse for Christmas, a camera and would like to go to Disney. I’ve been a good boy and hope you have too. I’ll give lots of carrots for your reindeer.”

Lots of letters included thanks for gifts from previous years and some students even complimented Santa, including Boe Carrington who wrote, “You are the sweetest and I love all you do” and Kanye and his elf Vinson who wrote, “Dear Santa Claus, you are the greatest of all time. I hope you can come down this year.” Braylee Wilkerson, 5, promised to “be good all next week” and ended the letter with “Thank you Santa, I love you every single day.”

There were many unusual requests, including Wyatt Whitley who asked for a cool dinosaur, a fake buck deer and an alligator for Christmas. Colt Woods asked for a camo shot gun, a space ship and a bike. Wes Maguire asked for a drone, toy lizard, go cart and for Trump to be president again! Hunter Reagan asked for “a real electric guitar with a speaker as big as my house.”

Some requests were quite difficult, including Mason’s request for the red car, dinosaur race car, a monster truck and a motorcycle, followed by “I want the real ones.” Cale W. Jenkins asked for a million dollars. He also asked for his mother to feel better. Easton Hall asked for a real dinosaur. Conner Tyler asked for a fire breathing dragon that comes with a remote control.

Some children asked not to get things from Santa, including Chloe Adams who wrote, “P.S. No coal please” at the end of her letter and Elijah Slagle who wrote, “Please don’t bring me any switches. Will you please bring me candy, not coal?” Madison from Jenna Williams’ third grade class asked for “no homework forever and $100.”

Brantley Blessitt wrote, “Dear Santa, I want a cat tree and a fast car. I also want a hover board and bait caster and a lot of lures and a clean pond and will you get rid of our beaver please. And that is all.”

Among many questions about the North Pole, the elves and the reindeer was Carter Pierce’s question. He wrote, “I wonder, have you ever not been Santa?”

There were some funny and unique requests, including Ki’Maya Burden who wrote, “I want a cat for Christmas. If you can’t afford a cat, I want a snake.”

Many letters included stories about the popular Elf on the Shelf, including Kynidi Brae Brinson who wrote, “This year I would like some clothes for my elf and I hope Ella my elf is doing great visiting. I love my elf, she is so much fun and I hope you have a great, great flight.”

Judah Reeves wrote, “My elf came today. He was in my dad’s stocking” and Kynsleigh Flynt Johnson wrote, “Your elves are watching me and Oaklyn. I hope you are getting a good report.” Brynnley Proctor wrote, “This year what I would like is a dog, three more elves and you to have a safe trip. I’m so glad you gave me an elf.”

So many children wished Santa safe travels and Ethan Brantley Vaughn wrote, “I hope you and your reindeer don’t get in a snow storm.”