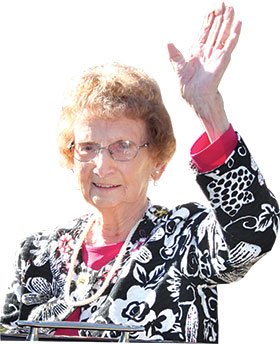 Sisters over 100 years old pass away

Two well-known local sisters lived in Pike for more than 100 years and passed away within weeks of each other.

Rosalee Mangham King, 105, died Dec. 17 and her sister Lucy Grace Mangham Ward, 102, died Dec. 12. Both sisters lived nearly their entire lives in Lifsey Springs and both attended Beulah Baptist Church for most of their lives.

The two sisters were world renowned when  they earned the title of the Five Oldest Siblings In the World by the Guinness Book of World Records in 2018. The siblings had a combined age of 490 years old in 2018 when the title was awarded to them. The story of the five siblings spread across the globe as various TV stations filmed them as they shared their testimonies and stories with viewers across the nation and beyond. In each interview, they emphasize the importance of love, family and faith in order to have a happy life. Their humor has also shown through in each interview and their inner joy shone.

Their brother W.D. Mangham was the first of the crew to pass away at age 97.

See full obituary information on page 3A for Rosalee King and Grace Ward.

Rosalee loved Christmas and for many years would send out special cards that featured a photo of her with a funny phrase.

In one, she is sitting in a convertible and the card says, “Rosa on the go, Happy Holidays.”

The card from 2007 featured Rosalee in a hot air balloon and said, “Rosa taking a flight for her 91st birthday.”

For one card, she was wearing camo and holding a deer rifle on a four wheeler and it said, “Happy holidays, Rosa went hunting.”

One card showed her cutting her lawn on her riding mower and it said, “Merry Christmas, Rosa still on the go, cutting leaves at 94.”

Yet another card showed her riding in a parade and said, “Rosa rides in a Rumble seat, grand marshal of the Molena Fest, up to new tricks at 96.”