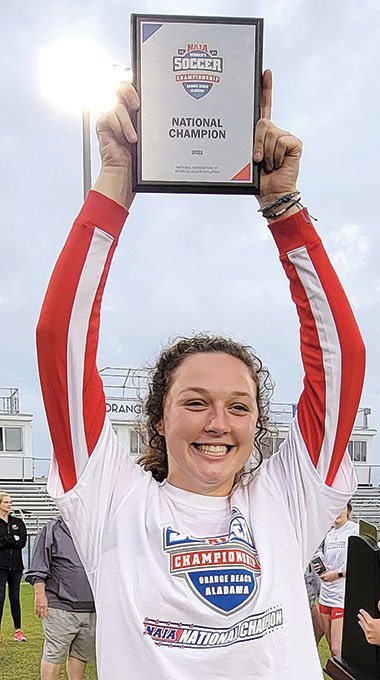 Standout goalkeeper Brooke Shavers, daughter of Sharmaine and Larry Shavers of Meansville, got the best Christmas gift a soccer player can ask for earlier this month, a national championship.

Brooke, who started for four years at PCHS, is now a member of the Tennessee Southern Firehawks which won the NAIA Women’s Soccer Tournament Dec. 6 at Orange Beach, Alabama.

In the tournament final, the Firehawks (23-1) defeated the William Carey Crusaders 4-3 on penalty kicks. The Crusaders were undefeated going into the final match.

After starring for the PC Pirates, Shavers played at Gordon State College in Barnesville where her team won two NJCAA Region 17 titles and played in the national tournament. This past season was her second at Tennessee Southern and, due to COVID, she gets to go back for a third year.

Shavers was a member of the first ever girls select soccer team in the area that was put together as a U12 Academy team by her coach and mentor Don Bohensky. The PC Fury girls won several Georgia Soccer Class A titles.

Sharmaine Shavers won the Cuties Ultimate Soccer Mom contest in 2011 for her work with the Fury. As part of her prize, the Fury girls got a training session with Olympian Joy Fawcett.