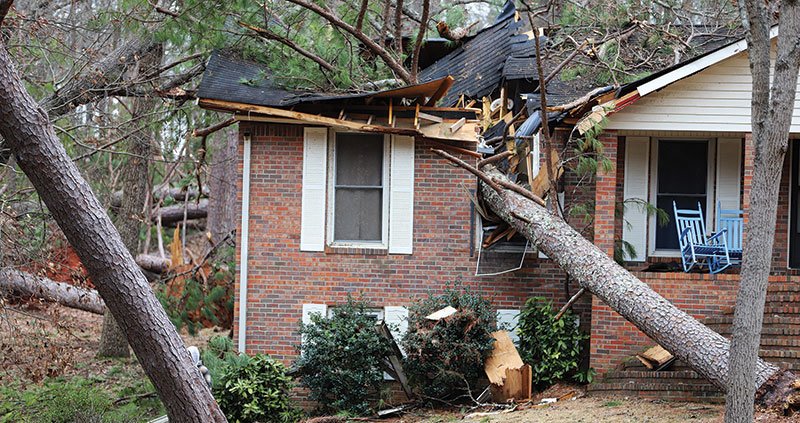 A huge tree crashed through the roof of a home on Dunbar School Road with dozens of other trees fallen around the home.

Pike and surrounding counties were hit by destructive storms and tornados the afternoon of Jan. 12 right as students were returning home after school. According to the National Weather Service, a tornado hit Meriwether County before traveling across northwest Pike and touching down in southwest Spalding County. The tornadoes left their destructive path from 3:45 p.m to 4:17 p.m. The storm was strongest as an EF-3 tornado in Spalding County and an EF-2 tornado in Meriwether County and the storm slowed to an EF-0 as it traveled across Pike.

“The overall storm remained extremely strong and the tornado did not dissipate, continuing east-northeast across Highway 362 and paralleling the Flint River as it crossed into the far southwest tip of Spalding County, crossing Hollonville Road and briefly crossing into the Pike County side of the Flint River. Here winds were only 75-80 mph, downing trees as far as could be seen from public roadways. The tornado lifted somewhere east of Blanton Mill Road about .3 miles north of the Pike-Spalding County line,” said the NWS report.

As the sunset shone through the rain the night of the storm, citizens from Pike and surrounding counties started showing up with chainsaws and equipment and clearing roadways and driveways. Over the weekend, volunteers from all over traveled to the area and helped clear debris and distribute food and water to those impacted.

“I want to tell you what an amazing county we live in,” said EMA director Jim Totten. “Even before the storm hit, the volunteer fire department, EMS, law enforcement and public works were getting ready to respond. As soon as the storm passed, they all went into action. 911 not only handled Pike calls but covered other counties, as they lost their 911 systems. Your county and city officials, both elected and appointed, were out in the storm helping clear roads. I can assure you that not all the counties had officials getting wet and dirty, but we did! Thursday night citizens, along with the county folks, were trying to clear road ways, so others could get home to their loved ones. There were a lot of worried people that got home because of this effort. We have a lot of people and companies with expensive heavy equipment that came out Thursday night and throughout the weekend. If it wasn’t for our companies and citizens with this equipment, the county roads would still be hard to get through. Our road department worked their tails off, but it was great having those other folks out there.
The utility companies should continue to get the recognition they are. They are still doing great work out there. Thanks to everyone who makes Pike a great place to live.”

The destruction in Griffin and Spalding County made national news and many citizens were in the areas hardest hit by the tornado with many having to find alternate routes home from work due to debris in the road and power lines down for miles.

Pike County’s Teresa Chumley was working at Hobby Lobby in Griffin when the storm struck and ripped the roof from the building, completely destroying the massive structure. She was on break on 4:08 p.m. when it was announced that customers and employees needed to take shelter in the break room.


“All the employees came in along with the five customers and a tiny yorkie. Jacob, one of our stock people, set up a weather radio and a lantern. About five minutes later, the lights went out. Beth, our bookkeeper, prayed for us, and a few minutes after that the radio alarm went off. We got under the tables to avoid any debris. You could hear the tornado ripping the building apart right outside the door. One of the ceiling tiles collapsed in the break room with water pouring in, then another. After that, Beth told us the storm had passed and that we could leave but the building had been destroyed and to be careful walking out. Strangely, I never felt scared except for a couple seconds under the table. I knew God was going to keep us safe. That was confirmed when we walked out of the break room. All walked out safely. No one was injured, trapped or killed. I knew God spared us because the roof was ripped off the store not that far from where we were. Walking out of the store, we waded through 3-4 inches of water. If the electricity had been on, the wiring that had fallen from the ceiling would have killed us all. The roof at the front end of the store was gone. We looked at the damage to the store and could not believe all the damage. But we were all unharmed, not even a scratch, even the pup. If that wasn’t a God thing, I just don’t know what is. He completely had His hand all over us and protected His children. He must have special plans for us. My grandmother always said that there is a reason for everything that happens. While a lot of people are trying to divide us, God is trying to pull us all together. Whatever the reason, I am positive it is for us to fulfill God’s purpose for His glory.”
Teresa said Hobby Lobby plans to clean up the store and restore it if possible or tear it down and start over. Another Pike County citizen was across the highway at Wal-Mart when the storm hit. Baylynn Strader was traveling home from work at Skipstone Academy and stopped to get gas since her car said she only had 10 miles until she ran out. She said it was not raining when she arrived at the store.

“I pulled in and my sister called me and said you need to get inside right now. I had enough time to get to the shoe area and had been inside maybe 3-5 minutes when the power went out. You could hear the tornado. It sounded like a train whistle and as soon as it started, everything went pitch black and it sounded like a stampede of people running through the store. A police officer told everyone to get in the middle of the store and to get low. I was in the men’s section and I got to the floor and a grandmother came around the corner with a 5 year old and she couldn’t get down with him so he sat with me and we talked about dogs and school and tried to keep each other distracted. As fast as it started, it stopped. When the lights came back on, it started flooding in the store and we were told to go outside to our cars. One officer said it formed and touched down in the parking lot. The store’s industrial AC unit had been taken off the building and dropped in parking lot and there was a giant hole in the roof. There was a red car that had been thrown against the building and the owner of the car was penned between the building and the car. I walked outside with a woman who is 36 weeks pregnant and we were looking for our cars and hers was on its side and all beat to pieces. My car is famous because pictures of it was on the news. It was my Honda, a blue car and a Jeep and the back end of the blue car was picked up and it hit my car as it was shifting in the air and landed on the Jeep.”
Baylynn said although she has to get her vehicle fixed, she is so appreciative to have walked away from the disaster scene, especially considering what happened to her mother, Tory Merritt, who lost her mother when a tornado hit her home as a young girl and injured her severely.

“Having a mom who is in a wheelchair and who was paralyzed the way she was, I look at it so different. I feel kind of guilty that I was able to drive my car home. Yes, I went through the storm but I know it could have been a lot worse. I know there are people who lost their lives and lost everything they had. I’m just very appreciative, very thankful and very blessed,” she said.