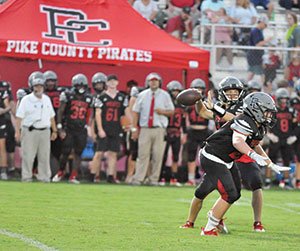 By Walter Geigernews@barnesville.comThe Pike County Pirates fell 28-7 in last week’s Battle of Potato Creek. It was the Pirates first conference game of the season. Their second game against the Taylor County Vikings this Friday was cancelled. Lamar got on the board first when they scored on a two-yard run at the 4:08 mark of the first period and added the PAT to make it 7-0. With 7:09 left in the first half, the Trojans scored on another two-yard burst. Moore again drilled the PAT and it was 14-0.Midway through the third quarter, the Trojans scored on a 19-yard run, adding a successful PAT.Pike got their only score of the night just 16 seconds later on a short run. Ozzy Osteen got the PAT to make it 21-7.LC closed out the scoring with 3:20 left in the fourth period on a five-yard run with the PAT making it 28-7.