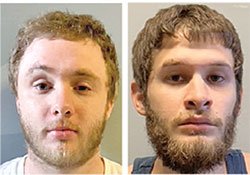 Two arrests made in breaking and entering autos case

Pike County sheriff’s investigators arrested two suspects after looking into several entering autos that were reported in the area of Buffington Road. Anthony Hernandez, 20, and Jeremiah Hartsell, 23, were arrested after a search warrant was conducted at their residence on Plantation Road. Several items that had been taken during the thefts were recovered. Additionally,Â a marijuana grow was discovered concealed in a storage building. Both subjects were arrested and are currently in the Pike County Jail awaiting a bond hearing. Both individuals were charged with four counts of entering auto, manufacturing marijuana and possession of a firearm during commission of a crime. Hartsell is also charged with possession of a firearm by a convicted felon. He has a previous court conviction for burglary in the state of Texas.