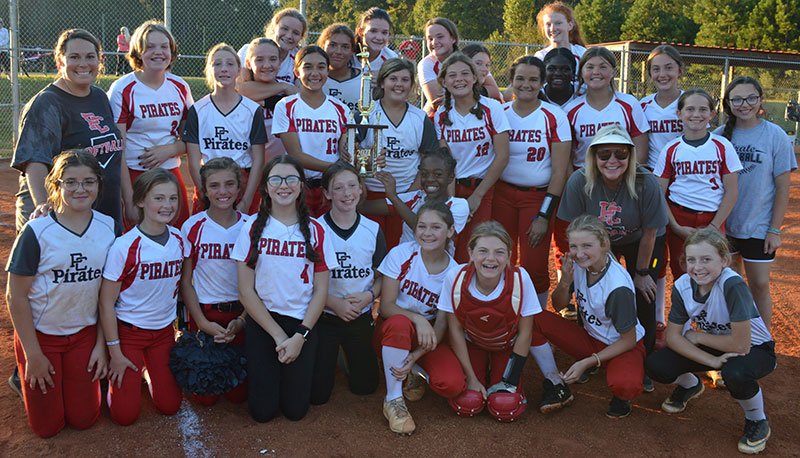 The Pike County Middle School softball team outscored their opponents by 107 runs to seven runs during the regular season and 18 runs to one run in the playoffs. They won the GSMS Region Championship with an undefeated 13-0 record.

The Pike County Middle School Lady Pirates softball team remained undefeated at 11-0 for the season and they dominated the playoffs, beating Henderson 9-1 and shutting out Gray Station 9-0 to earn the 2021 MGMSAL Region Championship.

Led by outstanding pitching from eighth graders Linzie Davis, Haislynn Cromer and Kerrah Foster, there were several no hitters and a perfect game tossed against Bryon. The Lady Pirates out scored opponents 107 runs to 7 in the regular season with eight shut outs. They out scored opponents in the playoffs 18 runs to one.

Linzie Davis pitched a no-hitter for the Lady Pirates as they defeated Gray Station in Thursday’s Region Championship. She pitched 57 pitches over five innings, allowing no runs, hits or walks while striking out nine.

The Lady Pirates’ offense shined as well in the championship game as three over-the-fence homeruns were hit by Linzie Davis, Ella Alpough and Maliyah Holmes. Haislynn Cromer started the game off with a double and went 2-for-3 at the plate as did Ella Alpough and Layla Moss.

The Lady Pirates defeated region rival Henderson on Oct. 19 to make it to the championship game. Linzie Davis pitched all five innings, allowing one run on three hits, striking out 10 and walking one. Despite some of the toughest pitching they’d seen all season, KK Foster hit a grand slam in the victory as Maliyah Holmes hit a triple and a double.

The ladies finished their regular season with a 17-0 victory over Upson-Lee Oct. 1 as eighth grader Haislynn Cromer pitched the shut out game, allowing no runs over four innings and striking out 10. The Lady Pirates offense was strong as they scored 10 runs in the first inning with Ella Alpough, Maliyah Holmes, Presli Readdy, Adyson Norris, Ashlyn Maddock and Maya Gales all sending runners across the plate with RBIs in the inning. KK Foster and Haislynn Cromer also had hits in the win.

“Being new to Pike, I didn’t know what to expect. Once we began summer work outs, I knew we had the potential to do something special not just this season, but to build for years to come,” said coach Ali Burch. “These students were asked to fill roles they’ve never been charged with before, and we as coaches are extremely proud of their hard work and performance; we are even more proud of how they have grown as individuals. While we have an outstanding group of eighth grade players, we have some incredible younger talent that has had the opportunity to be a part of this experience every step of the way. They understand what it takes to compete and I am excited for them to pick up the torch. Our theme this season has been “Pirates LEAD” and they have done just that!”

Published in Slider and Sports