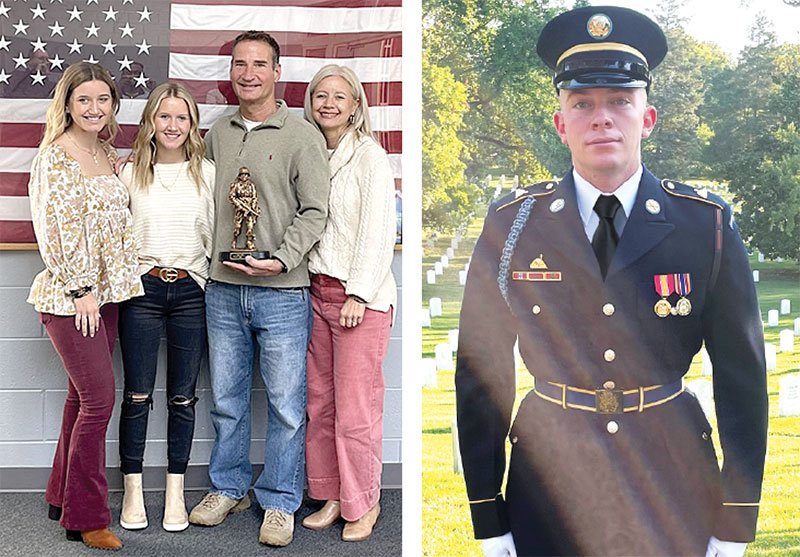 Veteran, Soldier of the Year honored

Each year Pike County Middle School honors a Veteran of the Year and Active Military member of the Year based on nominations from local citizens. The winners are presented with a trophy in honor of their service to our nation and to our community.

Veteran of the Year – Kyle Beck

Kyle Beck served in the U.S. Air Force and Army, was Airborne and was a member of the Army Special Forces (Green Berets) and was recently announced as the Pike County Veteran of the Year.

“He is always ready and available to help in anyway needed both with his family and his work. He is a dedicated, loving Christ follower, husband and father of two daughters,” said his nomination. “He has held several positions in his life after the military and they all involved helping others. He completed his degree in exercise science and owned a gym where he was able to help/encourage others to get in better physical shape, he really enjoyed this, but he wanted to also be equipped to help them get into better spiritual shape.”

To prepare himself to help others spiritually, he attended seminary and earned a Master of Divinity. Since then, he has used his degree in various settings. He served in Ecuador on the mission field as a chaplain in an orphanage for abandoned and abused children, showing them Christ and teaching them daily what a redeemer they have in Christ. He also used this position to let the children know they are loved and not forgotten.

After returning to the United States, he served at the Georgia Baptist Children’s Home where he worked with vulnerable children at two different campuses.

“Kyle took this job beyond the job requirements, mentoring the children and developing relationships that help them to improve their personal lives. Kyle has always gravitated toward those in need. No matter where he is, he continues to share Christ’s love and give hope to everyone he encounters. Leading by example is something Kyle demonstrates on a daily basis. Whether in the military or in civilian life, Kyle has always served a cause greater than himself,” said the nomination.

He has also served as a hospice chaplain and is currently teaching high school students at Rock Springs Christian school where he continues to positively impact the lives of children.

Soldier of the Year – Grayson Child

SPC Grayson Child was recently named the Pike County Soldier of the Year. He reported for duty in the U.S. Army in January 2020 after graduating from Pike County High School in 2019. After completing Basic Infantry Training at Ft. Benning, GA, he was assigned his duty station with the 3rd Infantry Regiment (The Old Guard) at Ft. Myer at Arlington National Cemetery. He serves with the 4th Battalion Alpha Company (Commander-in-Chief’s Guard). His company performs ceremonial duties, as well as search and rescue operations.

The Old Guard is a distinguished regiment known for its attention to detail and precision. Child was scheduled to be posted at the White House on Inauguration Day but was reassigned at the last minute because of the fear of violence in Washington and the potential need for search and rescue. His tasks also include flag folding ceremonies, put wreaths on the graves in the Arlington National Cemetery at Christmas, ceremonial detail for foreign dignitaries, etc. To earn the Old Guard Buff Strap (awarded to those who qualify for the Old Guard), Grayson had to go through a series of tasks and performances that tested his attention to detail and execution of ceremonial details. His final task was to be able to stand at attention for 90 minutes.

In the past six months, Child has been promoted from private to private first class to specialist and in February will be up for promotion to sergeant.

“He was unanimously selected as team leader (all the other team leaders are sergeants). His squad won the Best Squad Competition with SPC Child earning the MVP of the competition. His company won the Warrior Cup for best company. He was named Soldier of the Month for October. Child was also awarded the Army Achievement Medal and has already been nominated for a second AAM,” said his nomination. “A couple weeks ago, Child earned his Expert Infantry Badge (EIB). To earn the EIB you must demonstrate expert level on all the skills an infantryman might use.”

“There are 30 tasks ranging from medical, patrols, 10 different weapons systems, land mines, land navigation (both daytime and nighttime), PT test etc. The final test was a 12-mile ruck march at 4:00 in the morning carrying 45 pounds. If his pack weighed anything less than 45 pounds he would have failed. This is just one example of the difficulty of the tasks. Each task must meet specified guidelines and/or time constraints. It is a very difficult badge to earn. Most soldiers do not earn it on their first attempt. SPC Child earn his on the first attempt. Out of a little over 200 soldiers that attempted it, 180 failed. Child has always earned the respect of both his fellow enlisted soldiers and officers alike.”