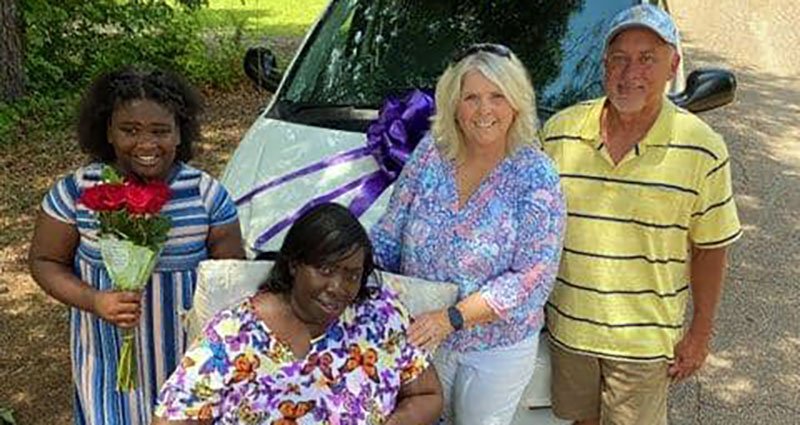 A local couple provided help and hope for the victim of a 2017 wreck which left her in a wheelchair by paving her driveway and giving her a wheelchair accessible van. Pictured are (l-r) Riley, Becca Buchanan, Carla Rickerson and Rick Rickerson.

Retired Griffin fire chief and Pike County resident Rick Rickerson knows what it means to be a good neighbor. When he stopped in October 10, 2017 to save the life of a driver who had just flipped her car multiple times, he was arrested for his efforts. But that didn’t stop him from helping change the life of Rebecca Buchanan even after he saved her life.

He was clearing blood from her airway after her vehicle went airborne and flipped several times at the Highway 109 and 18 intersection in Pike when an off-duty Georgia State Patrol ordered him to move his truck. Rick refused to leave her side since she had only taken two to three breaths on her own since the wreck and another good samaritan moved the truck for him. But Rick watched the lifeflight helicopter lift off from the back of a patrol car as he was arrested for obstruction of an officer. After his story went viral, the charges against him were dropped. But for him, the story wasn’t over.

He visited Becca in the hospital as soon as he was released from jail. At the time, Becca’s daughter was 5-years-old and he and his wife Carla brought her toys and a teddy bear.

“He walked in hiding behind a dozen roses and he grabbed me and said, ‘You’re okay, you’re okay, I’m so glad to see you’re okay.’ The whole room was in tears. He saved my life, I owe him everything,” said Becca. “I don’t feel lucky, I feel blessed. I drove that road every day and I’d never seen Mr. Rick. But for that day for our paths to cross just so he could save my life, I feel blessed and I’m blessed to know that there are still good people out there.”

Becca had a long road to recovery and spent several weeks in the hospital and in rehab, returning home just before Christmas. She was paralyzed as a result of the wreck and when Rick found out that she’d had another turnover recently – this time on her motorized scooter on the uneven terrain of her yard – he figured out a way to help again. Her wheelchair is the only way she can get around town to shop for groceries, go to church or support her daughter. The Rickersons even had ‘Becca’s Bus’ placed on the side of the van.

“She hasn’t driven since the wreck but she does ride her motorized wheelchair around the streets of Manchester where she lives,” said Rick. “Quality Paving out of Barnesville volunteered to pave her a driveway so she could safely get from her home to the road.”

But Rick didn’t feel like that was enough. He said that Becca’s daughter is now 10 years old and has basketball games and school activities to attend and when the weather is bad, her mom isn’t able to go because she can’t ride on her motorized scooter and no one in the family has a wheelchair accessible vehicle.

“My wife Carla and I had been saving money to buy a pontoon boat,” said Rick. “We sat down to talk and I asked her if we should buy the boat or a wheelchair accessible van for Becca and her family and she immediately asked, ‘Where are we going to find her a van?’”

Becca thought 11 Alive was doing a story about Rick’s efforts to pave her driveway when he and Carla surprised her with a new wheelchair accessible van. They drove up with purple bows on the white van. Becca’s daughter squealed in excitement as the van door opened.

“Now my mama doesn’t have to drive on the streets. It makes me so happy inside,” she said with tears in her eyes.

Over the years, the two families have become close friends and Rick and Carla continue to find ways to help them recover from that nearly fatal wreck five and a half years ago. Every year, they get together on the anniversary of the wreck to celebrate an amazing friendship and their incredible bond.

“My wife and I had been saving for a pontoon boat but you can’t compare a boat to this,” said Rick. “This is something that will change their lives.”