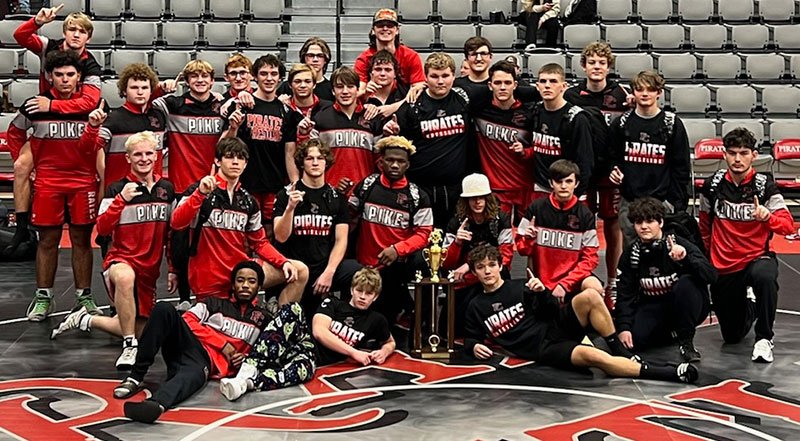 [Photo by Tammy Lee] The Pirates wrestling team are Area Champions after defeating tough competition in the Area Duals they hosted over the weekend. The team will host the preliminary round of the State Duals this weekend in Pike.

“The pace in the finals was set by Riley Gordon, Jack Barron, Owen Hammett and Jakilen King who all pinned, giving the Pirates a 24-0 lead. We wrestled strong at 215 and 285. Then we pinned again at 106 as Cayden Hinson got a pin. Ayden Stanley bumped to 113 and earned a pin to nearly lock up the match. The match was sealed at 138 as Zane Bristol won. Finally, the senior duo of Luke Woerner and Gage Lee widened the margin of the score with two pins,” said Clay Woerner who noted that the Pirates have had a strong wrestling season so far. “We traveled all over north and south Georgia over the break and right before the break and had some pretty good success,” said Clay Woerner. “We were fortunate to have finished higher than the defending state champions Gilmer at Armuchee High School in Rome. In a tough, 20-team tournament, we finished fourth. We also wrestled the defending State Dual champs (Rockmart) which were pretty tough as well at Cohulla Creek where we went 7-2.”

The Pirates will host White County, Adairsville and Dougherty at Pike County this Saturday with a start time around 10 a.m. The winner of the preliminary round will advance to the State Duals. Duals is when one team faces an entire other team with 14 weight classes. Once that concludes, the team will end the wrestling season with traditional tournaments where an individual travels through a bracket and scores team points.